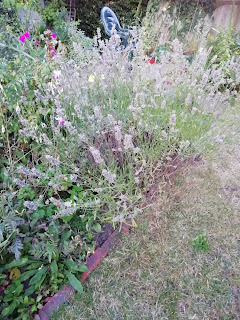 A lot of lavender bushes are now beginning to look a bit tired, the flowers have died and with the long stems and dead flowers they are looking a bit straggly

If you read gardening books, or watch much of the TV gardening shows you will be advised to prune your lavender in the spring. The dead flower heads can offer a little bit of frost protection and some people like to see them on the bushes through the winter. 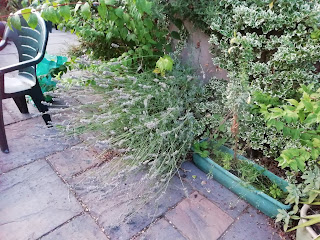 I don't do this! I always trim back lavender, especially English Lavender in the late summer or early autumn as the flowers die. I'm not a great fan of dead lavender flowers, and I am convinced that trimming them back now helps keep the bush tight and tidy. Leaving the pruning later can allow them to become a bit woody and leggy. Traditionally commercial lavender bushes would have been replaced every five or six years but with my system they stay tidy for a lot longer. 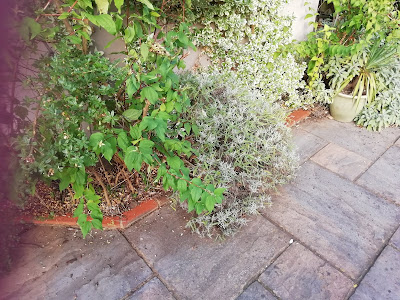 These are all something like fifteen years old or more, the ones below I replaced not long after I started my business back in 2005, the others were already planted when I started with the customer in 2004. I will admit that I have not always been quite as assiduous with my pruning routine as I should be, but I do try to get them done before winter, not least because any weight of snow can just destroy an open lavender. 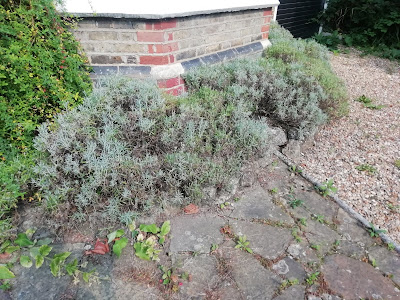 So remember not to cut into the woody growth just trim off the flowers and the top leaf growth and you will have a nice tight tidy bush ~ and lets face it we all want that don't we!

If you like you can also separate the dried flowers and use the in potpourri, or sow into muslin bags for your great aunt or indeed your own knicker draw!
Posted by Paula at 09:22