Tubas do not have a gender

For any brass player this is a busy time of year, this year I seem to have overbooked myself to a ridiculous level, even by my own standards ~ this last weekend alone I have played in three performances, conducted two rehearsals and played in another two rehearsals! I won't say that this was without stress, although there is more stress in getting to the point of the performance with all the necessary players, music, stands etc. than in the actual performance itself. 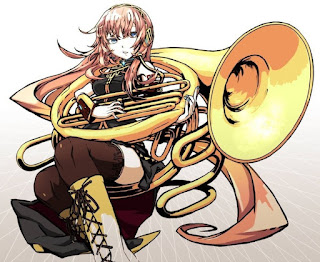 There is of course also very little time for anything else, over at Cyrsti's Condo JJ has been writing about how transitioning as a trans person is selfish, it dawns on me that being an active musician can also be quite selfish ~ I certainly wouldn't have been able to have weekends like this if I was still married. I often think that I am trying to do too much, but then I reflect on all the things I do and cannot think of any one that I would be happy to stop. This monster is of my own creation! In many ways my biggest concern is that by doing so much, I may be diluting the quality of some of what I do, I may not be giving of my best because of being stretched ~ maybe a problem to be addressed in the new year, I certainly don't have time to think about it now.

But all this is beside the point, after yesterday's concert the band joined the audience for a cup of tea and a mince pie, I had a nice conversation with a lady, maybe just a little older than me. She checked that I was indeed the tuba player and observed how unusual it was to see a lady playing the tuba, or trombone (our first trombone is also female, but a good deal younger than me). This gave me the opportunity to get on to one of my hobby horses about how instruments do not have gender! There is nothing about a tuba, a trombone or indeed a double bass or a drum kit that makes them fundamentally male, yet even now the idea that they may not be ladylike or appropriate seems to persist in some areas.

I was reminded about how, way back in 2018 when I was playing with WOW Brass for Processions at our first rehearsal we went round the room and were all asked to say what playing for this event meant to us. Not particularly wanting to "out" myself I recounted the story of a contemporary female friend who wanted to play the trombone, but when she told her school that, they more or less patted her on the head and said "never mind dear", what they did do was give her a clarinet and told her that if she got on OK with that then maybe she could learn the trombone later. I was by far the eldest there, and I'm sorry to admit that some of the younger members found it hard to believe me. But this was as recently as the 1970s, and is why it is so unusual to see women of my age playing the trombone or tuba.At the next rehearsal we had some extra players, including another trombone player about my age, she recounted how at school she had asked to learn the trombone, but had been given a clarinet and had been told to see how she got on with that. She was only able to learn the trombone properly when she joined the Women's Royal Army Corps as a musician ~ they had to retrain women to play the instruments that schools had refused to teach them.

The other side of this is the many young women who are discovering the joy of playing tubas, trombones etc. I recently played at the National Concert Band Festival at Watford, there was a youth band there with three tubas players, two of them were girls! I miss the WOW Orchestra and meeting these young women. The more women who do things that were traditionally considered male preserved then the more young women will see that these things are available and will pursue them them.