Again, I started writing this post some time last year at some point during a lock down, and never quite got around to completing it. Since then it has been sitting in the "Drafts" box waiting for some love. As I seem to be on a bit of a roll posting wise, at least until I go back to work tomorrow, I thought maybe it's time for completion. The new bits are in italics.

Some of my friends seem to think I have developed a dangerous habit of acquiring instruments, personally I don't think I have that many, and anyway the phrase "Too many instruments" is in my books an oxymoron.

I have had my beloved Yamaha Bass Trombone (Precious) for about 30 years now, in some ways I feel as though I should be thinking about a replacement, but it is possibly the best instrument in my collection, and a replacement would be excessively expensive ~ maybe that could be an aim for a retirement present.

Then I have my two tubas, a vintage Besson New Standard EEb which I have customised to make it a bit quieter and easier to play. Known as Baby (short for Baby Besson) as it is a bit smaller than a contemporary EEb I love this instrument, although she is now a bit bruised there are some pieces that she's just perfect for.

Until recently my Conn CC was known as "New Toy" but since I've had her for over ten years she is now known as "Big Shiny" For the last few years this has been my prime instrument for both orchestra and concert band, she has a big sound, looks great and I find the rotary valve tubas easier on my back than upright ones. The down side is that she's not really a professional standard instrument, this shows in the quality and thickness of the brass, the outcome is that as well as a few intonation problems, she dents way to easily, and if I really give her "the beans" the sound will "crack".

That's the serious selection, then come the toys! Not really toys but the ones I really can't claim any great level of proficiency on. I have been messing about with Bass Guitars for a few years now without gaining much in the way of ability, maybe there's something in that old adage about old dogs and new tricks. Last year I got given the best birthday present! A lovely sexy black five string Ibanez electric bass. I was gradually getting better, but find it difficult to practise on my own so my progress has stalled.

Partly because I have been having so much trouble getting used to five strings, I have now acquired a black four string Ibanez as well. It is lighter, slightly shorter scale and takes lighter gauge strings ~ all this adds up to much easier to play, but not as full a sound. I have gigged on both and can see the strengths of both, so I think they are both "keepers".

Then there is the Euphonium, an old unlacquered Besson Westminster, I know how to play the Euphonium, and I do have one ~ that does not make me a euphonium player! It is not just about proficiency on the instrument, I feel it is also a state of mind. I like to hide at the back playing a supporting role, otherwise I will have my back to the audience when I'm performing. I suspect euphonium players need to be a bit more of a show off. They are great solo instruments and get all the best bits in both Brass and Wind Bands. It's great fun every now and then, but I would never neglect my Basses in favour of euphonium ~ that means my scruffy but serviceable old Besson is quite good enough for anything I'm going to do. 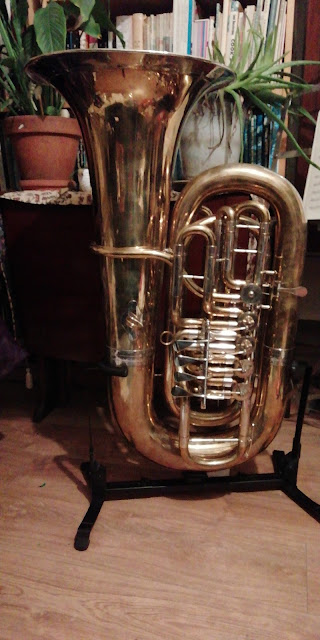 I always maintain I do not play Tenor Trombone, so why do I have one? Well in theory I am just looking after it for the Croydon Brass Band, It's a fairly old but very nice Yamaha Bb and F (in the Conn 88H copper bell style) It is very nice, and I do play it every now and then, usually in an orchestra where the part is more 3rd tenor than proper bass. I also have a pBone, you know, just for shits and giggles.

After this lot it just gets silly, I don't really know why I have a Cornet, a Violin, a recorder and various bits of percussion, they just seem to turn up.

Too many? no! That's why I'm a very happy bunny to have just welcomed into the family a lovely big five valve B & S CC, and can I just point out that this is no "Toy", and that it is Big and it is Clever!

Well you know what they say? It's all shits and giggles until someone giggles and shits.