Last time I posted I talked a bit about my aims for the year, I've not really done too well so far having last no weight at all and having only got to one concert that I wasn't playing in.   There was one aim I didn't mention as I have had it on my list for the last few years ~ to do a public stand up routine.   Well that actually looks like it's about to be fulfilled! 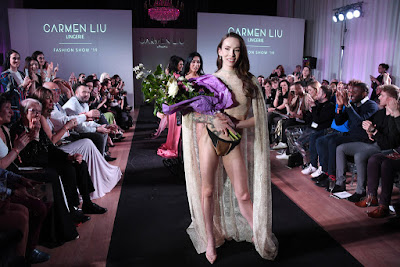 I hadn't listed going to the launch of a new range of lingerie. Last night I went up to town with some friends having been invited to the launch event for the GI Collection from Carmen Liu. It was a fun night and a joy to meet some wonderful people, including the designers mother and grandmother! The whole thing was only marginally marred by the presence of a few TERF protestors outside. I worry that their life is so empty that the best thing they can think of doing on a wet Thursday night in February is to stand outside in the rain ranting at people who just ignore them.  I can't say that I'll be buying any of their offerings, maybe 30 or 40 years ago, but these days I rate comfort higher than I used to.

I've also played in the most awesome concert, last month the LGSO played Shostakovich's epic seventh symphony, I was the third of six trombones, along with eight horns six trumpets stacks of woodwind and more percussion than you can shake a stick at. It's long, loud and leery. At the end of our performance I think the whole orchestra was emotionally and physically drained, maybe that's why we all seemed to need some wine to revive us.
Posted by Paula at 18:41